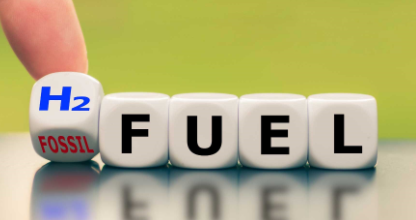 HYDROGEN GAS IS NOT THE SOLUTION

Hydrogen gas is being hailed as a possible replacement for natural gas because when burnt it doesn’t produce CO2.  So how is it produced?

The commonly used large-scale hydrogen manufacture is called Steam Reforming and is a two-part process.

The second part is to mix the carbon monoxide (CO) with water (H2O) again and a catalyst resulting carbon dioxide (CO2), oh dear, and another double atom of hydrogen (H2).

The two-part process produces 1 ton of hydrogen together with 9 to 12 tons of CO2 that needs carbon capture and storage into holes in the ground.  They will soon run out of storage space.

A much smaller scale and more expensive method of production is by electrolysis.  This is the inherently greener solution because the result is just hydrogen and oxygen.  To produce 1 metric ton (1000kg) of hydrogen requires 8.27 metric tons of water and 35.8MWh of electricity.

In 2020 the UK consumed 70 million metric tons of natural gas.  Hydrogen gas has a much higher calorific value than natural gas so to completely replace it would only require 25.2 million tons of hydrogen.  This would require more than 900,000GWh of electricity.  This is more than the whole World generation of electricity in 18 days, 45% of which is fuelled by coal.

Burning the hydrogen would generate just 300,000GWh so it is highly inefficient. Overall, it would result in a unit price for hydrogen of 54p/kWh, which is 13.5 times the cost of natural gas.

That is just crazy.

Unfortunately for the Green lobby, we need gas and coal fired stations that allow on-demand generation to cope with the massive variations in supply from wind and solar.  Nuclear can supply a continuous base level demand and we should frack for natural gas to make us energy secure, and not dependent upon Norway & Russia for 75% of our gas.