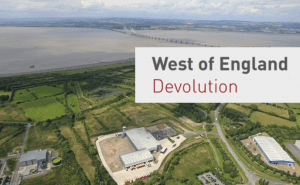 It is time to abolish the devolved West of England Combined Authority says UKIP Bath & Somerset.

The West of England Combined Authority (“WECA”) sits above the City of Bristol; South Gloucestershire and Bath & North East Somerset councils, whose residents vote for the all-powerful Metro Mayor. The title is a misnomer, as it does not cover the whole of the South West region, nor even the whole of traditional Somerset. The only local authority included is Bath & North East Somerset which, while still part of the traditional county of Somerset, is split from the main county as an independent unitary authority in the north.

The West of England’s metro mayor came into being in 2017. The incumbent is primarily responsible for the region’s strategic development of business, skills, housing and transport. This allows the incumbent to wield a great deal of power, over and above Bath & North East Somerset council and its democratically councillors. The local council still remains responsible for its basic public services, such as waste, highways management, schools and leisure facilities, whilst the metro mayor exercises wider powers over issues that span the region, such as economic growth and strategic planning, in particular road building and housing policies.

The following were the first preferences cast at the Metro Mayor election held on 6th May 2021:

So; why does UKIP Bath & Somerset believe that WECA should be scrapped?

1. It is an undemocratic construct

It is clear from the above results that this election weighed unfairly in favour of the City of Bristol and against the two smaller rural communities of South Gloucestershire and Bath & North East Somerset. Votes from the much larger City of Bristol (137638) outnumbered the combined votes of the two rural communities (115823). This meant that the majority of voters in rural South Gloucestershire and Bath & North East Somerset both voted for a Tory Mayor as their first preference but nonetheless, what they ended up with was a Labour mayor because they were hugely outvoted by the much larger hard-left City of Bristol. The rural communities didn’t stand a chance.

It is hard to think of any real achievements from the remote and invisible Metro Mayor. A warning as to the undemocratic nature of his role came when the previous incumbent pushed for the ill-conceived “Bristol Wrong Road”. Almost everyone living to the south of Bristol opposed it because it would consume large swathes of valuable green space around Keynsham and Whitchurch and lead to huge traffic problems, massive unwanted change and development.

UKIP believes that devolution is an expensive failed white elephant and we would scrap it. Devolution is an EU inspired concept encouraged by Labour’s Tony Blair and designed to turn the United Kingdom into autonomous regions to weaken the central UK government. Devolution has led to a more costly structure with expensive salaries, expensive buildings; expensive staff; and costly expenses payments all of which lead to higher council tax.

4. Unwanted by the voters

In March 2016, voters in Bath and North East Somerset decisively rejected the idea of having an elected mayor. In a referendum where there was a 29 per cent turnout, only 8000 voted for the change, while more than 30,000 wanted to keep the current system of a leader chosen by fellow councillors. All the political parties, and the area’s two MPs, had opposed the change at that time. However, the, then, Tory government imposed a Metro Mayor against the democratically expressed wishes of the people who live in Bath & North East Somerset. The Combined Authority does not replace the existing local authority but creates a higher level of sub-regional power. George Osborne, as Chancellor of the Exchequer, invited Bath & North East Somerset council to bid for regional devolved powers, as long as it agreed to be subordinate to a directly elected regional mayor. This proposition was never again put to the voters, and thus the undemocratic Metro Mayor concept (with fake democratic accountability) was imposed effectively by decree and without local consent. It is noteworthy that North Somerset Council wisely chose to decline the invitation to be part of the combined authority from the outset, fearing that the vast metropolis of Bristol would eclipse its rural area.

The above is just a summary of the key reasons why UKIP Bath and Somerset opposes the concept of Metro Mayor, and why we refused to take part in the 2021 WECA elections. Our policy is to continue to campaign to abolish the post of Metro Mayor, the functions of which, we believe should more appropriately transfer back to democratic local control under our own local authority.